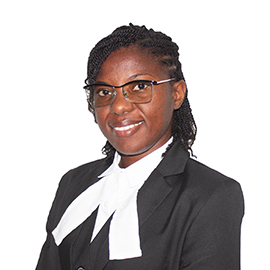 Kaydia Williams joined the team in 2021. Her main areas of practice include, personal injury, breach of contract, family law and estate matters.

Kaydia Williams has over nine (9) years’ experience as a Credit Relations Officer with JN Bank and severed as an Operations Manager in the BPO industry for over seven (7) years.

Mrs. Williams was a former member of the University Singers and the Honour Society of the University of the West Indies. She has severed on several boards within her church, including Assistant Director of the Religious Liberty Department and the Director for Wills and Trust.

She is a current member of the Jamaica Bar Association.

Have a legal issue or in need of legal adivce?